I try to make sure that I have agreeable weather when I go kayaking, but sometimes the weather has other ideas.  Yesterday, the sky was completely overcast, but showers weren’t predicted to arrive until late afternoon, with a thunderstorm expected at 10:00pm, so I launched at 10:00am.

I was on the water for five minutes when it started sprinkling,  That lasted for just two minutes, and I continued on my way, planning to paddle almost two miles upstream before heading back.  Rolling thunder in the far distance started about fifteen minutes into the paddle.  Five minutes later, I got to my halfway point, which has a ten foot stone overhang six feet above the water, when it started to rain.  Hard.  I sat, protected, for twenty minutes, enjoying the sound of the rain on the water.

When it stopped raining, I continued on for three-quarters of a mile and was able to see a great blue heron, two green herons, and a deer.  Pleased with the way things turned out, I turned back for the return to my launch point.  That’s when the weather had it’s way, again, leaving me to paddle for twenty-five minutes in a light rain.  If it was trying to ruin my day, it failed.  It was a great day for a paddle.

This haibun is my response to
Open Link Night #247 at dVerse.

How long have I been sitting on this branch?
Did I just get here, or am I about to leave?
You know, I don’t particularly mind the flight across the river.
Of course, I’m no starling. I know I can look languid,
rising and falling in flight as I dart along.
After all, there is a view to be admired.
And fish to spy out. There’s one now!

No problem, I’ll get the next one,
but that water sure was refreshing.

Wait, what’s that noise? There, upriver.
It’s that guy in the boat, again.
The one who splashes water on both sides.
What’s with him? Can’t he afford a motor?
It takes him forever to get anywhere.
He’s not just slow. He’s always stopping
to hold that think up to his eye.
But wait, he sees me. Time to dart to the other side.
Oh man, now he’s splashing again.
He’s coming over here now, isn’t he?
You know, he moves a lot faster when that thing is in his lap.
At least he can see where he’s going.
Well, I’m not going to hang around and wait for him.
It’s time to dart downstream. I’ve got fish to catch.

He’s still following me! This is going to be one long morning.

The prompt for NaPoWriMo.netDay 17 is to write a poem
that presents a scene from an unusual point of view.” 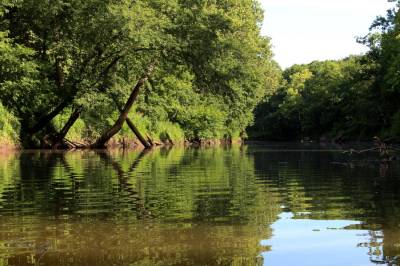 Beside the bank, out
of the current. Paddle

Their calls ring
for a brief moment.

Stillness of the morning air
returns, another reward.

This is an edit of a poem I wrote five years ago. When I first came to WordPress in 2014, it was to participate in National Poetry Writing Month, and Kayak Moment was my post for Day 10. The revision includes one less stanza. And enjambment. I seem to have become rather fond of enjambment. Who knows, this may see further revision, or it may end up, piecemeal, in another poem.

Linda Lee Lyberg is hosting Poetics: Water, Water Everywhere at dVerse, and she asks us to write a poem (any form) about water, that commodity that is so precious to all of us.

The Missouri River shoreline, seen from the Moreau River.  The stone behind the heron is a wing dam jutting into the river, constructed to control shore erosion.

Paddle downstream
to the Big Muddy
Don’t stop this time
Enter the river with joy
Be one with its current
Let it take us, winding, on
to the heart stream of this nation
Follow that to the gulf,
and out to the beyond

So my kayak speaks to me

But I turn back upstream,
a hundred yards
on the Missouri,
fight the current
to reach calm waters,
knowing I would be stranded,
had I gone any further

I do love the current,
feeling its life,
experiencing the life
surrounding it
But I love as much
the still water,
the life embracing it

And there is a life
I would not leave behind,
given the choice

This could be thoughts on life in general – the comfort we find in the familiar (and the treasured).  It’s a product of thoughts I had while kayaking yesterday.  And, it actually is about kayaking (for me).
I have no interest in whitewater kayaking.  Something about the potential for uncontrolled submersion with the added risk of collision with large obstacles underwater turns me off to the idea.  I have been underwater with obstructions and low visibility – wreck diving and diving in limited visibility in the Niagara River (hundreds of times), but always considered those to be under controlled conditions.  I also have kayaked on the Niagara River, paddling two miles upstream against a stiff current, and then paddling back with the current.
In fact, I knew a man in his early seventies who had, for years, been making an annual paddle around Grand Island – at least twenty miles, with at least eight of those against the current (due to the island’s shape).  I suppose part of my comfort in paddling on the Niagara was my familiarity with it over nearly sixty years.
But the main difference between the Niagara and Missouri Rivers is that one (the Niagara) maintains a fairly steady level, while the other (the Missouri) has a water level that is always in flux – either through heavy rains and the resultant feed from tributaries or the release of very large quantities of water by the U.S. Army Corp of Engineers to relieve over-flooding of reservoirs upstream.  Debris, including trees and parts of structures, is always coming downstream, often snagging on the bottom and affecting the current and anything floating on it (especially something as small as a kayak).  The channel would be fine, but how would I get back?
Since I kayak alone, I cannot park a second vehicle downstream to use for return to the launch, which otherwise would make for a long walk home.  The farthest I’ve gone into the Missouri River is less than a half-mile – upstream first, of course, so I have the current pushing me back on the return.
I do enjoy the quiet streams.  They offer plenty of photo opportunities.  Now, to get a waterproof camera!

This view of the wing dam shows that the high river level on this date has partially submerged it – creating a hazard to unwitting boaters.

My kayak against the shore
And I stroke
Paddle slicing the water
Moving upstream, wind in my face
Not one bird calling in the woods
No eagles or hawks to be seen
Not a blue heron in sight
Where are all the birds?
No kingfisher keeping pace
Just ahead of me
A lone woodpecker on a dead sycamore
Turkey vultures searching, circling
A quiet morning on the river
Riding with the current, slight wind at my back
Paddle slicing the water
And I stroke
My kayak against the shore

Day Twenty-Eight (Take Two) of 2016 NaPoWriMo.
The prompt from napowrimo.net is to write a poem as a story told backwards. Forward, backward… it’s all the same.

56 degrees
hard to pass up for
my December kayak

it will be there
tomorrow
and the next day

spend the morning
chatting with my son
lunch with my baby