Smiles in the Pumpkin Patch

Every year, the pumpkin farm would have a special event in the weeks leading up to Halloween. Trails were groomed, props were set up, and costumes were donned for “The Haunted Hayride.” A tractor would pull wagons loaded with passengers past the open graves of horrible monsters and the boiling cauldrons of cackling witches. Fires would crackle in the crisp night air, and shrieks could be heard coming from the frightened passengers on the wagons.

At the end of the hayride, everyone would laugh about the surprises they had experienced along the way. Some people would even glance nervously into the darkness and wonder if all that they had seen was actually pretend. Many went home with pumpkins they bought at the stand. There were always plenty of Jack-O-Lanterns carved from pumpkins from the pumpkin farm.

One night, after most of the pumpkins had been picked, the blue-eyed, blonde-haired pumpkin vine lay at the edge of the pumpkin patch and listened contentedly to the voices of the returning riders. Suddenly, she perked up at the most wonderful of sounds. It was the sound of little girls laughing.

The pumpkin vine reached out past the edge of the patch, moving along the grass to an area where the campfire was blazing. She had seen people gathered here on other nights: some talking, others drinking hot chocolate or cider, and still others just gazing into the fire and contemplating sights they had seen on the hayride. But this time she saw a group of young girls gathered around singing campfire songs. She was so excited, as she watched their giggling and the enthusiasm they put into the songs, that she moved closer to the fire than she had ever been.

That was when she heard it. One voice was so carefree and exuberant that it seemed to reach out and touch the blue-eyed, blonde-haired pumpkin vine. She reached out and raised a leaf so that she might view the source of this joyous sound. She turned her leaf, first this way, then that. And then she saw the voice that had touched her, and she heard the face that held that voice. And it was then that she wanted to smell the hair around the face and taste the life that was the life of the blue-eyed, blonde-haired little girl that sat before her.

The blue-eyed, blonde-haired pumpkin vine moved closer to the benches where the girls were seated. But just as she reached the middle bench that was her goal, the song ended, and the girls stood to leave. The pumpkin vine climbed the bench and extended its leaf outward to watch.

She watched the car’s lights fade into the night, and then she started on her way.

It was a long trip for the blue-eyed, blonde-haired pumpkin vine. It was several miles, with many busy intersections to cross, but she was determined to get to her destination before the next morning. There were many times that she had to go out of her way to find a wire or tree branch that crossed a street or road. It was fortunate that she was traveling at night so that no one saw her swift progress.

When she crossed the final street, along a maple branch to a telephone wire, it was nearly morning. She looked upon a house with festive Halloween decorations, and she knew that she was looking at a home that was filled with smiles and laughter.

As she crept along the base of the house, she could sense the sleeping forms inside. When she came upon one particular window, she caught the scent of that fine blonde hair, and she knew that she had reached her goal. She stretched up to the window, and raising her leaf to look inside. She saw the blue-eyed, blonde-haired little girl through a space between the curtains. Lowering herself to the flowerbed below, she smiled to herself in contentment as she set about her final task: to bring a laugh and a smile to that blue-eyed face.

Later that day, the blue-eyed, blonde-haired little girl was outside helping her father with some yard work. He was in the backyard raking leaves when she ran around the side of the house, yelling to him, “Dad! Dad! Come see what I’ve found!”

Now, this obviously was a special pumpkin, because it had chosen to make its appearance on a very special day: Halloween! This pumpkin was destined to be a Jack-O-Lantern! They carefully pulled the pumpkin from the vine, and the blue-eyed, blonde-haired little girl carried it into the house.

Her father spread newspapers across the counter, and she gently placed the pumpkin upon them. She then got a pencil and a blank piece of paper, and she practiced drawing pumpkin faces until she had the one she wanted. She looked at her picture, and she carefully copied it onto the pumpkin.

Her father then proceeded to use a sharp knife to cut a top opening into the pumpkin. Then, they each took a spoon into their hands and took turns scraping the seeds from the inside of the pumpkin. They placed the seeds into a bowl, careful not to drop any. It was messy work, and they laughed as the seeds squirted between their fingers. When they were all done, she would work with her mother to rinse them off, so that they could bake them. They would make a wonderful snack!

Then her father used the sharp knife to carve the face that she had drawn. He said to her, “Maybe next year you can use a special knife for small hands, and you can carve your own pumpkin. I know you’ll like that!”

He started with the eyes. They were sort of almond shaped, with points at each end, and they angled out towards the top. Then he carved the nose. It was a small triangle that pointed upwards. When he came to the mouth, he had to be very careful, because she had drawn some teeth that he did not want to cut off.

When he was done, a candle was placed within the pumpkin. They both smiled, and she laughed with delight at the bright face with the toothy grin! “Just in time for Halloween!” she said. 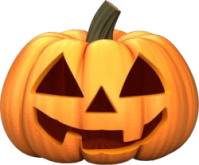 “Smiles in the Pumpkin Patch” is the fifth of eight short stories in Blonde-haired, Blue-eyed Adventures, a collection of stories about my daughter’s adventures, written for her twenty years ago. Halloween is a special time of the year, and no self-respecting pumpkin vine wants to be left out of the fun. 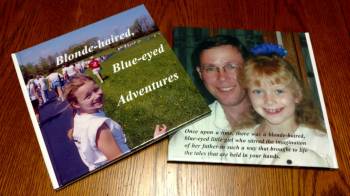 22 thoughts on “Smiles in the Pumpkin Patch”