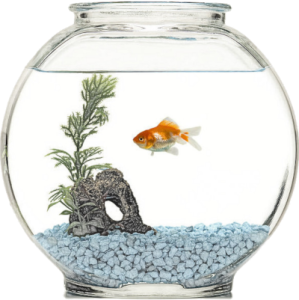 Jenny was her name, and she lived in a soft fishbowl that looked a lot like a baggie with a knot tied in its top. Besides being soft, it was small, and she hadn’t lived in it very long, perhaps a couple of hours. She had just come from a large fishbowl, with a school of hundreds of other goldfish.

Everyone had been very excited, because they were going on a field trip. No one seemed to know just where they were going, but the jostling and splashing as their bowl was transported had all of them swimming back and forth in anticipation.

Once the water settled down and it became obvious they had reached their destination, Jenny still had no idea where she was. So many other goldfish were gathered at the sides and bubbling over the sights, that she was stuck in the middle of the bowl wondering what could be so exciting.

Then, to her utter surprise, she was scooped up into the bright of day and brought briefly into the dry summer air. Before she could even gasp for her breath, she was just as quickly dropped back into the water. But, things were vastly different than they had been until this point. As she tried to swim about, she bumped into the smaller, soft sides of her new fishbowl. Light flooded in from all sides.

Everywhere she looked, there were colors and motion. She saw people walking about, playing games and gleefully laughing as they enjoyed their own surroundings.

Now she knew where she was. She was at the fair! It was so exciting and wonderful that she thought she would simply wear herself out swimming back and forth to see all the different sights. Her blonde hair trailed behind all the while.

As she watched the people closest to her she could see that they were throwing little white balls into the center of her booth. The balls bounced about as they ricocheted off the edges of the many tiny bowls that were lined up on a table. Once or twice, she saw a ball go into a bowl. The person would point excitedly at the bowl, then receive a ticket from the vendor of the booth.

Then she realized that a new person had stepped up to throw balls at the bowls. It was a blue-eyed, blonde-haired little girl. She had such a big smile and ever-so sparkling eyes that Jenny thought no one could ever be happier.

Jenny watched her with such rapt attention that she knew instantly when she had gotten one of the balls into a bowl. She jumped up and down and pointed with great pride at the bowl as she shouted, “I got one in!” As she was handed a ticket, she said, “I get a goldfish! I get a goldfish!”

Suddenly, Jenny understood the game, and she raced about excitedly, hoping that she would be the fish that would go home with the little girl. The girl threw a few more balls, but she wasn’t able to get any more into the bowls. Jenny continued to swim about in anticipation, but when the little girl was done she turned and walked away with her family.

Jenny was so heartbroken by this turn of events that, even though the bustle of the fair continued around her, she failed to see any of it. She swam slowly about and watched absentmindedly as other people threw balls at the bowls on the table. Somewhere across the way, someone threw a dart and broke a balloon with a loud “POP!” and others spun wheels or tossed coins, but all of that escaped her attention.

As she slowly fanned her tail to stay off the bottom of her bowl, Jenny heard a familiar voice and realized that the blue-eyed, blonde-haired little girl had returned. She was holding out her ticket and saying, “I came back for my fish.”

Jenny heard that and started to race about frantically in her soft, little fishbowl. “Me! Me!” she called excitedly. She hoped the little girl would choose her, and she knew that this probably was her last chance.

The little girl reached out without hesitation and took the baggie that held Jenny. And, although Jenny thought that no one could look happier than that little girl looked when she had thrown the ball into the bowl, she saw right away that her smile got even bigger. She brushed a stray lock of her blonde hair behind her ear as she headed toward her car with her family, proudly holding up her goldfish for all to see.

Jenny swam about in her soft goldfish bowl, her blonde hair flowing in the water behind her. She realized that someone else could be just as happy, for she, too, had a smile on her face. It was a pretty big smile for such a small goldfish.

“Jenny Comes Home from School” is the fourth of eight short stories in Blonde-haired, Blue-eyed Adventures, a collection of stories about my daughter’s adventures, written for her twenty years ago. It’s the story of a goldfish that can’t wait to go home with a very special blonde-haired, blue eyed little girl.