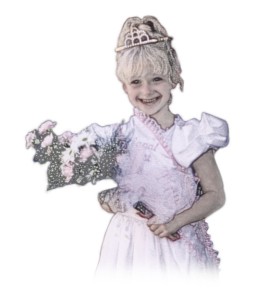 Once upon a time, there was a tiny blue-eyed, blonde-haired princess who did not know she was a princess.

As she stood on the stage in a line of pretty little girls, two of them were called forward, one at a time, to receive awards. The girls looked very happy as everyone applauded. She wished that she could be one of them.

Then her name was called, and she walked to the center of the stage, happy that she, too, was receiving an award.

When the audience applauded, she thought that was very nice. She was handed a bouquet of flowers, and as she bent her head to look at them a beautiful princess placed a glowing crown upon her head and a lovely sash across her shoulder. The Tiny Princess walked back across the stage, waving to the cheering audience.

The Festival that followed lasted a week, and the Tiny Princess had the grandest time going to all of the functions, especially the Parade Across the Canal. Her reign would last a year, and she knew that when she placed a crown upon the head of the next Tiny Princess there would be another little girl happy for all of the attention at the Festival Along the Canal.

“The Tiny Princess” is the second of eight short stories in Blonde-haired, Blue-eyed Adventures, a collection of stories about my daughter’s adventures, written for her twenty years ago. It’s the story of a special day in the life of a shy little girl, when she was selected as Tiny Princess for the Canal Fest of the Tonawandas (an annual event celebrating the Erie Canal).

22 thoughts on “The Tiny Princess”