In sudden warm temperatures, heavy winter snow flows with water, the melt running past ground still frozen. River reservoirs fill, and engineers with their minds on management of nature’s course decide when and where water will flow. Relentless spring rains add to already overburdened rivers, while waters rise and banks disappear. Levees that have withstood years of repeated onslaught are breached or overtopped. Water flows through city streets, while farm fields lie underwater, the season’s crops destroyed as they wait for the river to recede.

This haibun (word count 98) is my response to Carpe Diem Weekend Meditation #89 Extreme Haibun … rain, with the challenge to write of a haibun of 100 words or less in length. 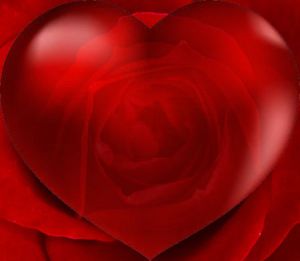 Distance. Family. A 700 mile drive, and balance is achieved. Fair weather may be followed by three days of storms, but balance will not be diminished. Rain or shine, my grandson’s wedding will be a day of celebration. Not even Sunday’s drive home can change that.

a family grows
two hearts look to their future
journey together

After a fairly busy weekend, I’m trying to catch-up on poetry on blogs I follow and responses to prompts from NaPoWriMo.net, all the way back to Friday. I think I might be into Saturday evening at this point (late afternoon Monday). Yeah, I might catch up by tomorrow evening!

Saturday was spent at the Unbound Book Festival, where I attended readings by several poets, which inspired a poem of my own for Saturday. So far, I’ve been able to keep up with a poem-a-day for April, meeting the NaPoWriMo prompt more often than I expected. Of course, some of my responses rely on my own definition of the prompt! Today’s poem was an ekphrasis, inspired by a watercolor I acquired last year.

reading and writing
thirty days of poetry
what could be better

Yesterday was spent at Forest Park, in St. Louis, where we attended a car show, the 2019 Concourse d’Elegance, which is held every Easter Sunday. There were several hundred classic cars from 1917 to the late 1970s. Close by in the park was an area that probably had twice as many cars – street rods of all imagined modifications. One of the last cars we viewed at the Concourse was a 1959 Alfa Romeo Gulietta Spider with 411,000 miles on it, shown by the original owner. It was a beautiful, sunny day, with a lot of people in attendance, so it was hard to get the photos I wanted. 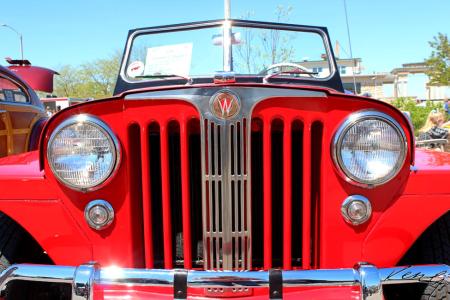 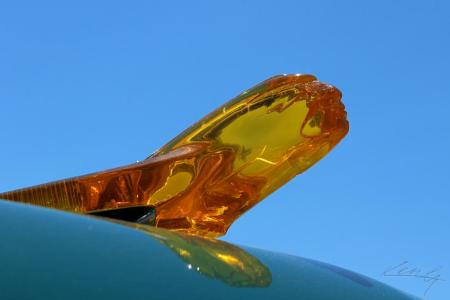 I see it daily, that rent along a cedar branch waiting to fall forty feet to the ground. Months have passed since a heavy snow tore the limb from its roots, a cardinal that frequents it a reminder that life goes on. There it hangs, framed in a pane above my laptop, waiting for me to write something, like tearing down the ghost of a memory of nothing good, long out of sight and begging to just let it die.


releasing the past
resolutely moving on
without looking back 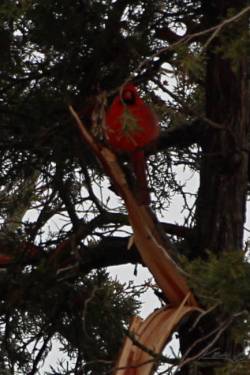 What’s that you say? Your lips keep flappin’, but nothing’s coming out. You’ll have to speak up if you want me to hear you. I didn’t come all this way to talk to myself! And don’t tell me to not to get all excited! I don’t know what all the buzz is about, and I sure don’t know if any of what you say rings true. In fact, I couldn’t say, one way or another, if you’re saying anything at all!

The tanka I wrote earlier today is now a haibun, hopefully to meet the prompt for NaPoWriMo.net Day 15, which is to write a poem with a dramatic dialogue, with a specific voice or character.

While kayaking last May, I saw a bird and chicks in a nest high above the river, thinking it was a great horned owl I had seen there previously. It wasn’t. It was a red-tailed hawk. Well, I paddled that same same stretch of the river yesterday, and the great horned owl is back.
(click images to see larger view in new tab)

And there is a chick in the nest with it. 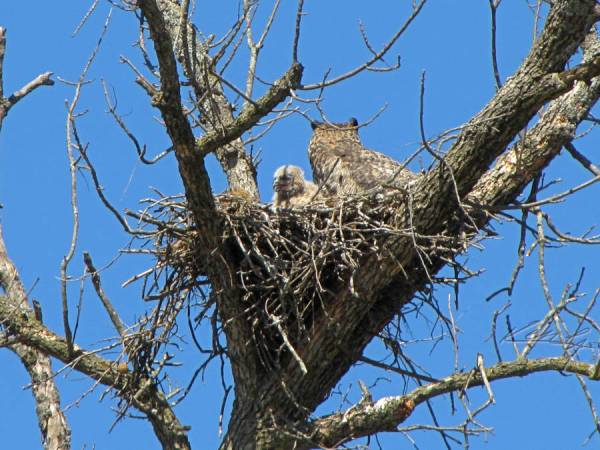 After a short while, the adult flew off, presumably to draw my attention away from the nest. It didn’t work. 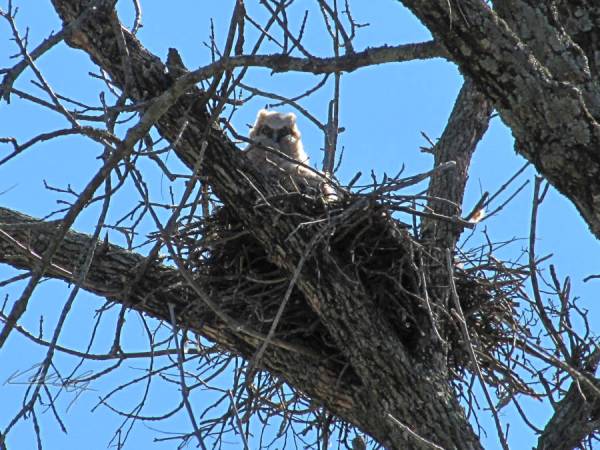 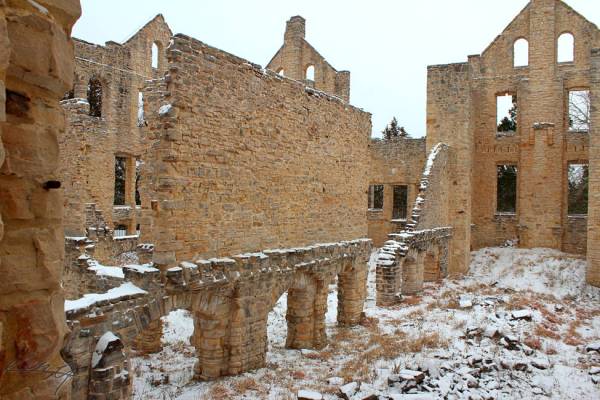 If Walls Could Talk

Eyes that listen will know a story. The wind whistling past limestone walls on an Ozark bluff, through holes that once wore windows. Soot aging with the stone that wears it. A cellar beneath ruins blanketed with snow. That wind again. Or are those voices from the past, a gaiety that would be silenced by flames that leave the chill of death, even on a summer’s day? Once the snow melts, there will be a rebirth, the forest green again. And voices. Tourists gazing at those bare stone walls and listening for any sign of life.

The “castle” at Ha Ha Tonka was built in the early 1900s and succumbed to fire in 1942. The estate is now a Missouri State Park that features 3700 acres of forest that include caves, sinkholes and bluffs overlooking the Lake of the Ozarks. Stone for a water tower, carriage house, and the mansion was quarried on the property. More than 100 yards from the home, the water tower was the only undamaged structure, but it was gutted in the 1970s by a fire started by vandals. (click on images to see larger view in new tab)

With this poet’s choice of listen and silence as prompt words, this is a response to
Colleen’s 2019 Weekly #Tanka Tuesday #Poetry Challenge #126,
“Poet’s Choice of Words.”

Having lived most of my life in Western New York (WNY), land of blizzards and the dreaded Lake Effect Storm, I find winter to be a different animal here in the central (north-to-south) mid-west. The mid-Missouri winters I have experienced since 2012 have been more like a WNY spring trying to decide if, maybe – just maybe – winter shouldn’t last until the middle of April. That’s how it is here, from December to March.

Temperatures fluctuate from week to week and day to day. Six inches of snow is a lot. That doesn’t mean we won’t have the rare foot of snow over a weekend, but it sure won’t be around for two weeks, because the temperature will be back to the forties, or higher, in a couple of days. We had sub-zero temperatures last week, directly followed by two days in the sixties. 57ºF today, but then it’s back to a week in the thirties. Back in Buffalo, that’s almost T-shirt weather.

Do I wish it were still cold? No. Just give me some consistency. And I don’t mean bare trees with no other way to tell that winter is here. I may not miss the cold temps and storms of WNY, but I do miss those scenic winters, with weather I can count on.

This haibun is my response to Frank Tassone’s #Haikai Challenge #71: Still Cold.

Among the gravestones of my past family members, that of my parents is the only one I ever make an effort to visit, but an interest in genealogy led me to find the markers of my paternal grandparents last year. I even researched an uncle previously unknown to me, one who died before my father was born. He was buried with his grandparents, his name absent from the granite memorial that bears their names. I imagine that as a matter of economy in a time when hardship was a way of life.

On a return visit to Buffalo last week, I rediscovered those of my maternal grandparents, their location last known to me thirty years ago. I cleared away the grass and dirt encroaching on those markers, then I went in search of the headstone of my aunt.

I found it in a much soggier section of the cemetery. It has a lovely image of an angel on it. Nearly ninety years ago, five years before my mother was born, she was struck and killed by a bus while crossing the street. She was just seven years old. Other than my siblings and children, there are no other family members living in the area, so, in all likelihood, her grave has not had any visitors since my son made a rubbing of her stone for a grade school history project, thirty years ago. All but a small portion of her name was covered with sod, so I carefully cut that away, watching as ground water seeped in to obscure the lettering. It was like time having its way, all over again.

Visiting cemeteries in the past year has me thinking about graves and their markers. Those monuments exist for the living, of course, but once the living who have any connection to those dead are gone, they might as well be nameless stones. Sure, some of those stones are significant, as reminders of historical figures lying beneath them, but the remainder are only reminders of the obscurity that awaits us.

Watching the water cover my aunt’s stone has led me to think about my own marker. For years, I have assumed I would not have one. My children understand that I wish to have my ashes placed in the Niagara River. It’s a place I always have enjoyed, especially during my hundreds of scuba dives there.

But now I imagine my children on a boat anchored on the river, slowly lowering a one hundred thirty pound piece of granite over the side, the water washing over and obscuring my name and the numbers of my lifespan, knowing that, even without a barrel, it would be my “turn to go over the falls.” The river will be their reminder of me, without any need to wander among granite markers wondering which one is mine.

Primus – Over the Falls from Mark Kohr on Vimeo.

Distance Is Not a Factor

This morning finds me on a solitary journey, as my wife stays behind for work, driving on a ten-hour jaunt to visit my son and his family in Cleveland, where I shall hold for the first time my lovely granddaughter, now four weeks old. My drive continues the next morning, Thursday, taking me to Buffalo for holiday visits with both my son and daughter, interspersed with visits to sisters and friends.

Maxing out the time of that stay takes me to Sunday morning and a very, very long drive home, as I avoid driving on New Years Eve day, weather permitting. Indianapolis is a seven-hour drive and offers a layover if weather becomes a factor, leaving just six hours for an early drive home, the next day – hopefully early enough to avoid the serious drinkers on New Years Eve.

Odd breaks may offer a chance to read random posts by my friends on WordPress, but I anticipate a lot of catching up, once I am home.

This graphic from weather.com shows the weather system over the States, as it is expected to develop, west to east, this week. My route (the red line) will be through rain, with snow expected in New York, once I arrive. The stretch from Cleveland to Buffalo runs parallel to the Lake Erie shoreline and is known for its “lake effect” winter storms. I’ve had my share of storms along that route. Hopefully, they will have passed before my drive home on Sunday.