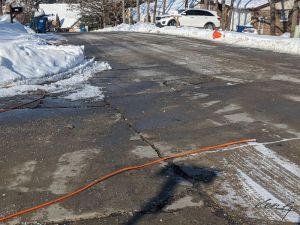 Yesterday’s internet outage was brief – less than two hours after the snowplow broke the “temporary” cable lying in the street near my house, the cable was replaced. With all of our calls about lost service in the last month, it appears we have been made a priority for repair.

A phone call to the city’s Streets Department was met with sympathy, but, “That’s between you and the cable company. The streets need to be plowed.”

And the snowplow struck again this morning.

My new SIM card, which will allow me to switch to T-Mobile with unlimited data (at a savings) will arrive today. Just in time. Verizon has notified me that, with two days left in my billing cycle, I’m about to go over my data allowance, which is no surprise since this snowplow/cable situation has forced me to burn data on my phone.

And yes, this blog was uploaded from my phone.

Cutting the Cord
Three for Three
Four for Four

15 thoughts on “Five and Counting”