This haiku is my response to Carpe Diem #1833 Butterfly.

I’ve spent the last two mornings walking the forest, meadow and wetland trails of a 106 acre conservation area in Missouri known as Runge Nature Center. It’s located in the capital of Missouri, adjacent to the state headquarters for the Missouri Department of Conservation, so the 2.4 miles of trails, some of them paved, are always well maintained. Runge offers some great photo opportunities, which vary with the seasons.

I returned there today, to take some follow up photos (in addition to those in yesterday’s photo blog), including one I had in mind for today’s Photo Challenge (Structure) at the Daily Post. The first photo here is the one I had in mind, but I chose another for that prompt when a Leatherwing landed on the thistle. One shot I wanted to follow up on, from yesterday’s post was of the Monarch caterpillar. I found it on the same milkweed plant as yesterday, along with a couple more that were less than half an inch long. (The larger is over two inches.) Then, I came across some wild turkeys, and as I took photos, a coyote stuck his head up out of the tall grass in the background, just long enough to leave a blurred image. Even so, it was another rewarding day with the camera.

(In the slide show, each photo offers a link to a larger image.) 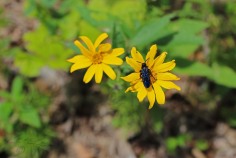 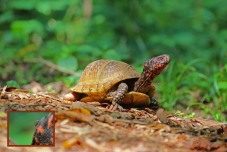 Images: Runge Nature Center, Missouri, August 28 & 29, 2017.  In the Viewer, each image has the option for a larger size.  (Moss Rock Trace can be viewed by clicking.)