Seeing Robert Okaji’s Thinking of Li Po at Sky’s End reminded me that I’ve had this Chinese interpretation (key word: interpretation!) in my draft folder for a few months. I decided I probably should post it while the calendar says it’s (technically) still autumn – although the snow here would say otherwise.

This wine is fit for an autumn rain
in the cold, as leaves fall around the house.
There is no need to go out, only to sleep.
Time for one more cup when this one is empty.

A steep stone path climbs the distant cold mountain
with homes high in the white clouds.
I stop the carriage to admire the maples in the evening.
No spring flower can compare to their frosted red leaves.

A Light Boat with Short Oars

Traveling west on the lake, short oars serve me well,
as I follow the water along the green, curving shore.
The faint sound of pipe music follows me,
flowing through the fragrant grass of the dike.

The water sits like glass in the still air,
holding my gaze as boats pass me without notice.
I sit unaware of my boat’s movement as their ripples reach me,
until startled sandpipers fly past the brush on the bank. 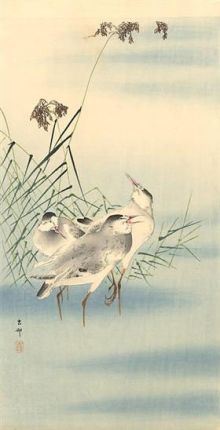 Climbing a great height, I look upon the four seas.
From heaven to earth, I can see forever.
The colors of autumn are muted by frost
blown by the coldest desert wind.
As it sweeps across the mighty eastward flowing river,
thousands of clouds billow from its force,
and the sun’s brightness fades
behind the endless cover of white.
Swallows and sparrows nest in the parasol tree,
and a beautiful phoenix finds shelter among jujube thorns.
I’ve come this way many times,
singing as I carry my sword on this difficult road.

Outside my window, the wind blows the snow sideways.
I open a flask and let the wine and stove take me in,
much like a fishing boat in the rain
with sail down, as one with the sleepy autumn river. 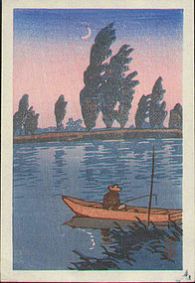 The swirling wind driving the rain seems never ending.
The four seas and eight wastes are one, beneath a great cloud.
An ox passes me. Or, is it a horse. Who can tell?
How can the Jing River be told from the Wei, muddy from clear?
The millet may grow, but the grain’s ear has turned black.
A farmer and his wife can expect no hopeful news for their fields.
In the city, a basket of rice is worth a silk quilt.
Both buyer and seller think theirs is the better deal.

The sun sets beyond Kuizhou’s wall, casting long shadows
Always, the Dipper Mansion leads my eye to Chang’an
Hearing a gibbon’s call, the third time brings a tear
I set out on an August mission by raft, never reaching home
Lighting ministry incense is a far cry from visions of a comforting pillow
Faint, sad reed flutes are heard from the mountain tower’s white battlements
Look now, under the moon, at the morning glories on the stones
Already, the rush flowers glow on the islet shore

The “Twenty-eight Mansions” are part of the Chinese constellations system.

Attempts by Tu Fu at attaining a position in civil service often proved futile, yet, when successful, those positions seldom were fulfilling. Three years before his death, he traveled down the Yangtze River, in an attempt to reach his ancestral home in Henan province. Due to ill health, he stayed for two years in Kuizhou, where he wrote prolifically. He then journeyed again, getting as far as Hunan province, where he died. Further details here.

The river’s surface reflects the moon, just out of reach
A lantern shines as midnight nears
An egret sleeps, its head curled, at one with the sand
A fish jumps behind the boat, and I hear it splash

Moon shining on river beside my boat
Lantern lights my way at midnight
Egret sleeping soundly, its head curled in the sand
Behind the boat, a fish jumps and splashes

What message is this simple verse meant to deliver? Is it the peacefulness of the scene? The distance of the moon, emphasized by the insubstantial form of its reflection? The freedom the fish enjoys while the egret rests? The many messages delivered to the senses? The sense of being part of something greater?
If it is the latter, are the questions even asked, or is all simply a given?
Perhaps it is all of these.