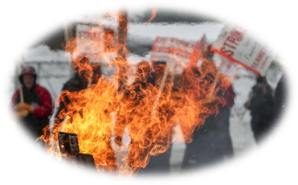 Heretics abound, restricted
not by faith, or perhaps bound
by an overabundance of faith
in their cause, a method born
of a desire to establish worth.

Strike not those who would
strike against you, for should
not violence be left in the past,
even when considered to be
the roots of our success?

Yet, having raised the cost
of our labors to one negotiated
not on the streets but at the table,
is not the bargain assured
to those whose motive is profit?

When others would aid in that profit
by doing the masters’ bidding,
who is to blame those who trade
bargaining for violence, and who should
be the first to call them heretics?

This poem is my response to Poetics: Epiphany in the Time of Holiday, the prompt from Dora at dVerse ~ Poets Pub. Dora asks that we “write about such a moment in the context of its occurrence (shopping, socializing, celebrating, religious observance), a moment of epiphany.” I am not able to relate any holiday to an epiphany, so this will have to do.

As described by Dora, “An epiphany, writes critic X. J. Kennedy, is ‘some moment of insight, discovery, or revelation by which a character’s life, or view of life, is greatly altered.’” I have chosen to address a moral issue with my poem.

Mine is a blue-collar background in trucking, with more than thirty years as a member of the Teamsters union. With many nights spent beside fire barrels while manning pickets to protest management’s reluctance to bargain, usually during contract negotiations for a multi-employer contract, I also have stood by fellow members as strikebreakers were hired by their individual employers to replace them. Those times were no holiday.  Well into the 1990s, I saw picketers resort to violence, not physical violence against strikebreakers, but violent enough to cause damage to equipment. The movement was supposed to have moved beyond those tactics, but an argument against them could be futile when others saw no alternative. While I understood the history of my union and the establishment of the first nationwide contract in the 1950s, I never understood the violence that led to it. Having witnessed, first-hand, some degree of that, I made every effort to remove myself from anyone who subscribed to participating in it.

33 thoughts on “Heresy in Protest”