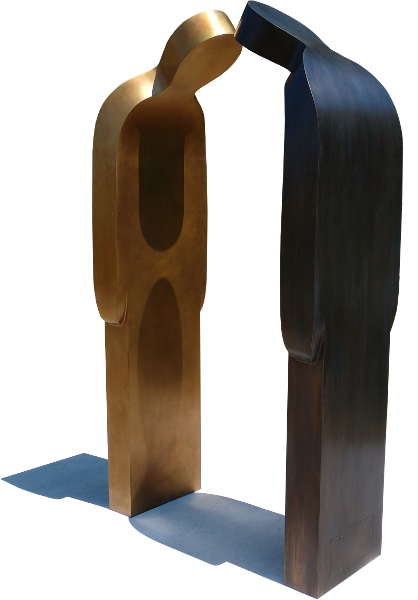 Joy has the power
to lift the shadows of sorrow.
Though they may persist,
they do not cancel
celebration, which has a power
of its own. To own that
is an expression of freedom.

The sculpture above, titled “Adjacent,” is by Chad La Fever and is being dedicated Sunday as part of Juneteenth celebrations in Jefferson City, Missouri (the state capital). The sculpture, made from silicon bronze with a clear lacquer seal and wax, stands about 7 feet tall and is one of many planned for Community Park in the Historic Foot District Area Sculpture Series, a focus on the experiences of African American Jefferson City residents during the world wars and segregation. About the sculpture, the artist says,

“The sculpture is a commentary on segregated co-existence and represents the very different lives of Black and white people living near one another, yet worlds apart. “Both figures are standing together in familiar and intimate proximity, but a wide gulf existing between the figures prevents them from being fully engaged. With heads hung and nearly in contact, there is a sense of sadness, hesitation and resignation. But there is also the feeling that the two figures are coming together with the intention of moving forward.”