Trees on the roof, vines growing
from the windows, the only life
in a prison closed in the Flood of ’93,
the big one. Imagine it’s haunted,
calling to the river. Listen closely.
The river is back, and the bars
are rattling underwater. Waves
lap at the walls in response,
and the vines flourish. 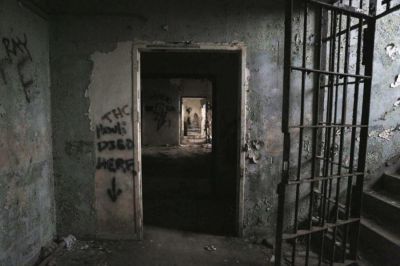 Built in 1926 in an area then known as Cedar City, Renz Prison Farm was part of the Missouri prison system, becoming an all women’s prison by 1990. Standing on the Missouri River floodplain and abandoned during the Great Mississippi and Missouri Rivers Flood of 1993, when the river remained above flood stage for more than 60 days, it sits empty. The land is now privately owned, and the building is surrounded by 500 acres of farmland (and the trees and vines that have taken hold). Costly asbestos removal stands in the way of any demolition. Marked “No Trespassing,” the building is known to be visited by “urban explorers,” and is used occasionally by law enforcement for active shooter training. Current flood waters on the Missouri river are six feet lower than the 1993 level, but still 9 feet above flood stage, so the “lake” surrounding the prison likely will be around for a few more days.

1993 flood photos, with Jefferson City across the bridge in the distance.

The top photo is mine, taken May 27, 2019.
Graph and 1993 flood images found at National Weather Service.
(Clicking on each photo will open a tab with a larger view.)