Back in March 2017, I posted a blog (with a video) about kayaking monthly, explaining how I make the videos to post on Facebook as a way to stay connected to my family in Ohio and Western New York. Pat R. (jazzytower/thoughts and entanglements) suggested a photo blog showing some of the wildlife and sights that I see. I’ve finally organized my kayaking photos (which meant checking a LOT of folders on my hard drives – I haven’t been as organized as I should be) and here is that blog, fourteen months later!

(Clicking on each photo will open a tab with a larger view.)

I’ll start with a photo from Western New York. Before moving to Missouri, I took one last long paddle upstream on a section of Ellicott Creek that I hadn’t seen before from the water. It passes through the campus of the State University of New York at Buffalo (UB) – actually in a suburb, Amherst. I’m glad that I did, because I took one of my favorite photos on that creek – with my cellphone! 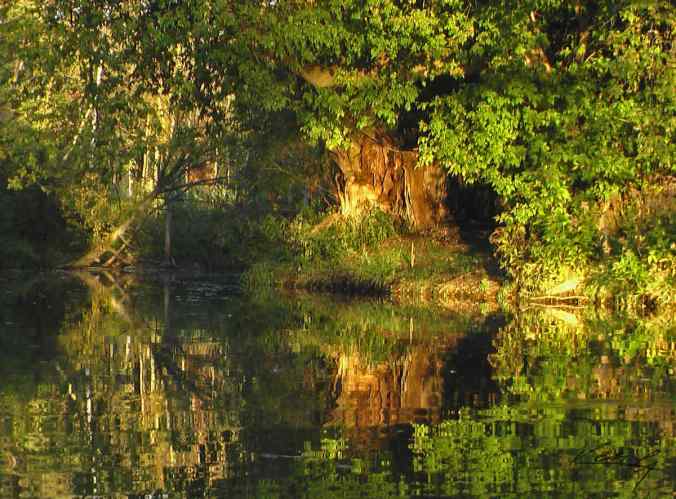 Since moving to Missouri, I’ve continued to stay mostly in small streams and rivers. If I launch in the Missouri, I would need to make a “round trip,” paddling forever against the current. Paddling alone, I can’t leave one car at the exit point and take my kayak to a launch point upstream. I’ve paddled into the Missouri River and gone upstream a short distance (tough, against the current) to drift/paddle back downstream to the stream I started in, but that’s it. To control the buildup of silt in the Missouri (and to control bank erosion) the Army Corp of Engineers constructs stone wing dams. Sometimes a couple hundred feet long, they angle from the shore to direct the current. Even with these, dredging to maintain a channel is a year-round project.

Occasionally, I will paddle on the Osage River. It’s half as wide as the Missouri, and the current is mild enough that I can paddle two to four miles upstream without any problem. I don’t often paddle late in the day, but this sunset on the Osage is one of my favorite photos. The farm field beyond the trees was covered in smoke (which drifted across the river at times) from a controlled burn.

The Osage River and many of the other rivers and smaller streams have sections that run right next to tall limestone bluffs. Missouri is known for its caves, so it’s not unusual to see small caves in those bluffs. 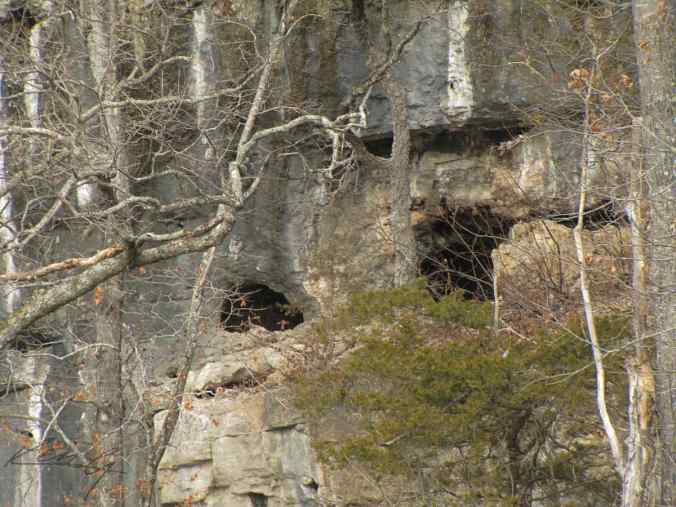 I can count on seeing wildlife on most river paddles. Great blue herons, turtles and turkey vultures are three creatures I see nearly every time (except December on into March for turtles and herons).

A green heron is much smaller than a great blue heron, about the size of a crow. 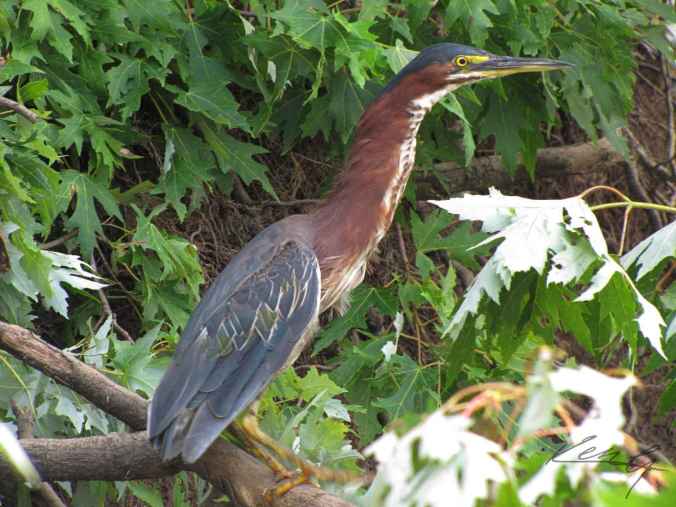 I may not see bald eagles soaring over the smaller streams as often as I do over the Missouri and the Osage, but I’m more likely to see one perched closer to the water of those streams.

This juvenile bald eagle (below) sat on a branch twenty-five feet above a stream, and dropped into the water just ahead of me to catch a catfish in shallow water, struggling to get it to shore. 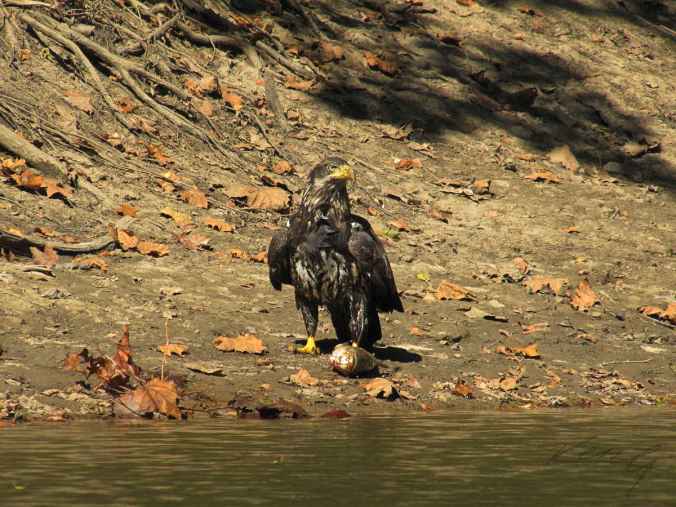 And finally, some creatures that I see while kayaking are a little more fantastic than others.