When I lived in Western New York, I never tired of going to Niagara Falls, sometimes several times a month. The feel of the water rushing by through the rapids above the waterfall, and then that immense power cascading over the edge is very exhilarating. The photo opportunities – daytime, night, cloudy weather, sunny days – were inexhaustible. I also made a point of hiking below the falls, along trails at the bottom of the gorge. Again, the sense of power is overwhelming, with the rapids churning away and the thought of the strength and power held by the river as it wore away at the limestone of the escarpment for 20,000 years to reach the current location of the falls, seven miles away. Yet, even as the rock is being worn away by the water, it continues to contain the river within the gorge. 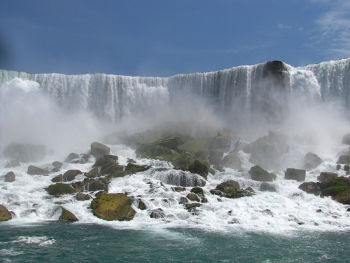 The American Falls, seen from the deck of
“The Maid of the Mist”

Haibun ~ prose, often about a journey and in the first person
~ followed by a haiku or tanka