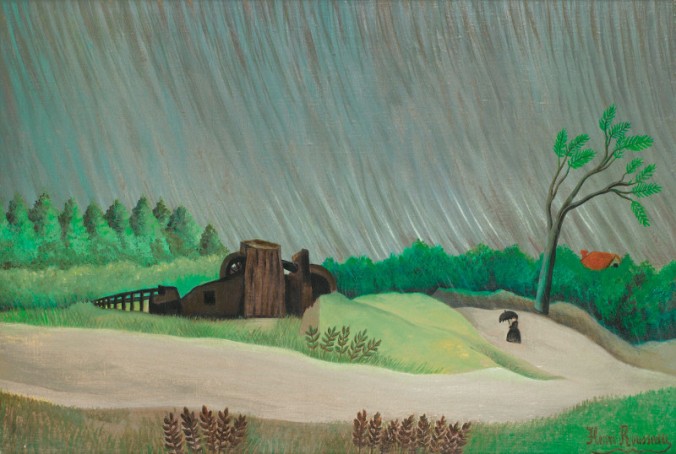 Henri could be so demanding at times. Once he had a particular vision, there was no turning his mind from his task. Marie had posed for him many times, but these conditions had to be the worst. They had come to this location on two other occasions, only to have him cancel the proceedings and fold up his easel; once because it had stopped raining and the other because it wasn’t raining hard enough.

As she stood in the road facing the local mill, wearing a black dress and with her black umbrella doing little more than to keep the raindrops off her face, she presented the forlorn aspect he desired. As he walked away from her, up the hillside to his easel, he kept repeating, “Abandon! Abandon! I must capture that feeling!”

Well, here she stood for several hours, soaked to the skin. Yet there sat Henri, under a shelter on a nearby hillside, peering around his canvas to capture the scene before him. Any time that Marie turned her head to glance in his direction, he waved frantically for her to face forward.

She would show him abandon. This would be the last time she posed for him.

Jane Dougherty’s Microfiction challenge #12: Abandon presents a painting by Henri Rousseau, Un Matin de Pluie (A Rainy Morning), and the theme Abandon. Staring at the scene repeatedly and getting nothing, I finally decided to write about the circumstances of the actual painting. The word count here is 200.  As always, I welcome Jane’s critique.